With constrained capacities, many tenants yet to reopen and virus concerns still high, Bay Area malls have seen welcome progress since reopenings began in mid-June.

But with current public health guidelines and phased reopenings slowed or even reversed, malls still have a long way to go. Movie theaters, indoor dining and other retailers being closed in Bay Area counties make things challenging.

“When you get government orders that say you can reopen, yet only 50% of your retailers are able to open or are comfortable opening and have the staff back and trained, that certainly makes it challenging,” said Najla Kayyem, senior vice president of marketing at Pacific Retail Capital Partners.

As of this week, 25% of San Jose mall Eastridge Center’s 100 or so stores were still closed, according to Pacific Retail, which owns the site. Of those still closed, 40% are technically allowed to reopen. Within a few days of its reopening last month, Eastridge saw 55% of its typical pre-pandemic foot traffic.

Though traffic has since leveled off at around 60%, Kayyem said Eastridge Center is still outperforming other malls in the owner’s portfolio, which includes properties in Southern California and the East Coast.

“It goes to show that the market there in San Jose definitely had an appetite to come back quicker,” Kayyem said.

Other Bay Area malls, too, are seeing encouraging signs, their owners say.

Similarly, Concord’s Sunvalley Shopping Center has seen sales up for some retailers, thanks in part to an increase in the number of items purchased per transaction, a spokesperson for Taubman Centers, the mall’s owner, told Bisnow. 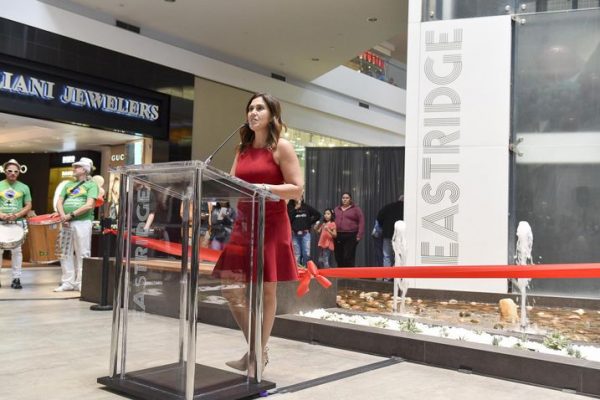 Big tenants like AMC Theaters and 24 Hour Fitness are still not allowed to reopen in Santa Clara County, leading to a “lack of critical mass of retailers all opening at the same time,” Kayyem said.

Likewise, Bayfair Center in San Leandro has about 50% of its tenants still closed, though, like with Eastridge, most that are still closed are that way because of health guidelines, according to Lori Coleman, executive vice president at mall owner Madison Marquette.

While some mall sales are partially back, shoppers are getting different experiences than a normal trip to the mall would entail. State guidelines for shopping malls call for thorough and frequent cleaning of high-traffic areas, the closing of amenities like children’s play areas, limited seating options and other measures.

Many are meant to promote physical distancing, including the use of physical partitions and ample signage. Overall, malls must limit themselves to 50% occupancy, according to the latest guidelines.

At Sunvalley, available parking has been reduced to manage occupancy, and each tenant is also responsible for managing its own occupancy levels, according to Taubman Centers. The Concord mall owner said it is also planning on adding a vending machine where personal protective equipment like masks and sanitizer can be purchased.

URW has instituted similar measures and is selling customers masks and “no-touch tools” that enable customers to move about the mall while avoiding high-touch areas like door handles. Some sales proceeds are going to No Kid Hungry, a campaign run by nonprofit Share Our Strength.

As of this week, Westfield Valley Fair and Westfield Oakridge have nearly 80% of stores reopened, with San Francisco Centre at about 60% reopened, though Heil said new retailers are reopening each day.

“Shoppers are returning, and we’re excited to welcome them,” she said.